This prospect is situated at the eastern edge of a substantial Lloydminster pool, which gradually pinches out to the east and is truncated by a later tight channel to the north and east. In the past two years, wells operated by competitors have been drilled horizontally to develop the eastern area of the pool and have exhibited oil production with very low decline rates. This suggests that in the Lloydminster zone, which reaches up to 50 feet of effective porosity, that considerable additional oil could be recovered from either closely-spaced wells completed using slotted liner, or with slightly larger spacing and enhancing production utilizing multi stage fracking.

Tuscany drilled the initial horizontal oil well, on the property in December, 2014. The well, was completed using slotted liner and was placed on stream. The Company believes initial production, while marginal, supports the potential to  drill a substantial number of additional wells and to complete them with multi-stage fracking techniques. Tuscany expects to further evaluate the  Morgan property when oil prices have returned to a more acceptable level. 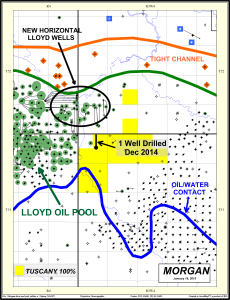